Bettiol: "Carapaz the favorite for the Giro, but I see great balance" 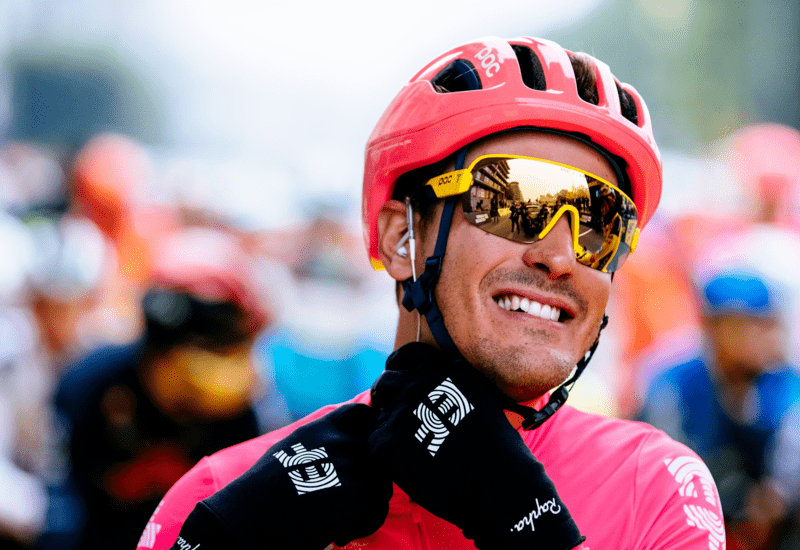 The EF racer exclusively in the Fantacycling YouTube lounge

Alberto Bettiol was a guest in the Fantacycling lounge on YouTube and Twitch to comment on the fourth stage of the Giro d'Italia . It was then an opportunity to have a 360 ° chat, with the usual irony and transparency that are never lacking in the Tuscan runner:

“I followed the stage finale on the radio for a while and I understood how the race went. I was expecting Van der Poel on the run, because he is strong even uphill. If we want this was a small disappointment. Then once the escape went away there was a lot of control behind it. The rhythm of the Ineos, when it is like this, it is difficult to make big attacks and given the climbs they will go on, the climbers have rightly kept a bit under cover.

Vincenzo held out a bit of pride because he was in his Sicily, but in his heart he knew that it was not a Giro this year in which to go to the rankings. So on the one hand I am happy, maybe I would have preferred to see him in another land, because I am convinced that he regrets so much having detached himself in Sicily. But I am convinced that he will come out of the standings even more and will make a great Giro d'Italia, calm and serene and go fast even on the day of the time trial.

Miguel Angel Lopez … I didn't quite understand what happened. However, if I already had Lopez in the squad at Fantacycling I would put him on the Tour, but if I had to buy him no, I would not take him.

I think the favorite is Carapaz , without a doubt. Let's remember that we are only at the beginning and that the Giro is very long, but here, he managed well, he ran little and in my opinion he is prepared. Even if, for now we are seeing Bardet very well, even if Ciccone has to recover from the time trial; in short, it has several contenders. It will certainly be a very open Giro compared to the Tour, also very nice to see, because Pogacar is on the Tour and it's hard to contend with him for the victory ”.

Then a comment on EF, Bettiol's team, and future plans:

“ I don't know the team for the Tour yet, it will come out ten days earlier; we also see Rigoberto injured his shoulder at Liège and we will have to see how he will be. If there is, we will take a look at the stages and see what opportunities there will be, also because you see Rigoberto as he runs, he doesn't need to have a team like Ineos at his side. For the UCI standings we are not worried, we know that there is this reform with this point system, but there are other teams that need to be seriously worried, not us.   Then, seeing the first stage, with the fourth place, gives me hope. So he can win a couple of stages, but later on ”.

A comment also on Italian cycling and its prospects in view of the world championship in Australia: "It is a transition period, we have been coming for two or three years in which we are strong in the classics and less in the big tours, while before with Nibali and Aru we were strong in the big tours and less in the classics. They are periods. I think this is the litmus test for Ciccone, we'll see if he will be able to go fast in the big laps or if he will dedicate himself to the one-day or one-week races. However, in my opinion, there are many interesting young people behind them; let's give it time, as they gave it to me, you have to give it to these guys too. In my opinion, you just have to wait, but that's normal. Let's look at the French, I don't know how many years have they not won the Tour, instead we Italians, it's not very many years, Nibali won the Giro in 2016. The route seems to be suitable for me, the coach will go to see it, but here we are see you after the Tour de France. If I feel able to lead the national team, I will very honestly talk about it and do the program with him.

For Tokyo 2021 I have some regrets, I had missed the whole second half of the season due to illness, but in the face of what happened to Sonny, that's okay, I'm lucky, there are other priorities in life. I heard Sonny recently, in my opinion now he is very peaceful, he takes what he gets. He understood that the priorities, then, are other. Obviously he had the misfortune that this thing happened to him after he won the Paris-Roubaix. If he remained a runner for 5-6 races a year, second tier or close to some Tour victory ... but stopping after winning the Paris-Roubaix, I think it burned him. Stopping after reaching that apex there hurts the most. But I repeat, the priorities are other, cycling is a parenthesis; if it can be done, it must be done, if it cannot be done, patience. So I think he is in a phase of life where he takes what he gets ”.